Hats off to Delran, NJ Education Association President Mike Kaminsky (@MKaminskiNJ) and his leadership team! They are doing excellent work in the push back against education 'reform'. Not only did they recently host both a showing of "Standardized" (trailer above), and a Take the PARCC night, Delran also threw down the gauntlet with this very powerful statement against standardized testing, posted on DEA member and fellow ed blogger, Ani McHugh's Teacherbiz blog:


We, the members of the Delran Education Association, believe that authentic, teacher-created assessments are an important component of any successful instructional program. However, we stand in defiant opposition to the New Jersey Department of Education’s obsession with the use of high-stakes standardized testing, both in our own district and in districts across this state.


And that's just the beginning. It's a perfect overview of education 'reform' and standardized testing for folks who haven't read every book that's been published on the subject over the past few years.


Show me the money!


Along with about 350 other concerned parents and educators, I attended the Take the PARCC event, which was a BYOPD affair. The first half hour was spent trying to get everyone in the room logged on to the Pearson website to take the sample test. I'm hoping that all works out statewide on actual testing days because Acting Commissioner Hespe assures us that over 90% of school districts across the state are tech ready. And for those that aren't, he's got about $1.3 million in grant money... for the whole state.

Gov. Christie has cut close to $5 billion in education funding since he was first elected, and the devastating effects are still being felt. So I'm happy that the state managed to scrape together a few bucks for cash-strapped school districts. I'm sure the good people of Bernards Township, one of NJ's many affluent and successful suburban districts, are thrilled that, despite their hefty property tax bills, they will have to raise about $900,000 to replace their turf fields, which have a shelf life of 10 years, because the state could only cough up $58K to help 'em out with their tech upgrades. That's a whole lotta bake sales.

The state itself has spent about $27 million so far to gear up on their end. Where'd they get that money? The pension system and the transportation trust fund have been raided to the bone, but we magically have $27 mil to—oh silly me! The money must be found because this is for the edupreneures children.


Once everyone was logged on, Ani and Mike led the audience through some of the nuances of the platform, and it quickly became clear that this test is first and foremost about computer skills. If the students don't have them, they won't do well—period. The size of a Chromebook screen isn't much bigger than an iPad. Students have to read passages and mathematical equations, answer questions, keystroke essays and scroll through text on something with which many have very little experience. And it starts in third grade. Many administrators know this, so they're scrambling to get as many of these devices into the hands of as many students as possible. I don't care how much time the average 8-year-old spends on the computer, playing Angry Birds for hours is a whole lot different than this: 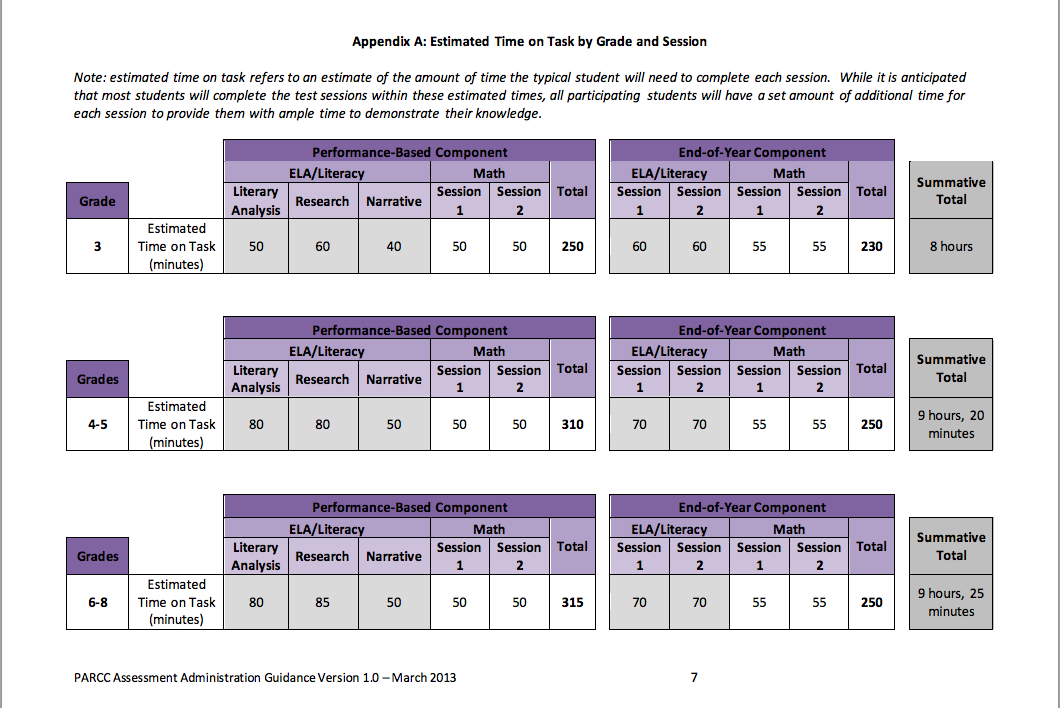 That's 9 days of testing, folks: 5 in March and 4 in May. Once that sunk in, the demeanor of the room quickly changed. The Q&A session progressed rapidly from 'how can this happen?' to 'how can I opt my kid out?' Several parents stood up to announce community groups and Facebook pages they've started in order to organize and inform other parents. So much for Hespe telling us at the NJEA Convention that he isn't "aware of any opt out movement in the state." By the end of the night, I think there were more interpersonal connections made than Internet connections.

The biggest takeaway of the night was this: Parents have to lead this revolution. Teachers can and do lead the fight on other ed 'reform' battles, but the front lines on testing must be filled with parents. And my money is on the parents of special needs children because they always have to fight, and this one's gonna be particularly ugly.

Case in point: I was recently interviewed by New Jersey News12 on the state's gear-up for the PARCC. Commissioner Hespe was also interviewed. To be fair, much of an interview gets left on the cutting room floor. The reporter spent about a half hour interviewing me for what amounted to a 30 second sound bite. But, listen to Hespe's comment at the 2:28 mark:

[PARCC is] going to prepare students for the tests of the future.

That is what Hespe thinks the PARCC will do, and I don't know about you, but that scares the bejeezus outta me. The flawed tests are based on a flawed set of standards that the teachers must teach so the students can get better and better at taking flawed tests.

For all the data mining that now happens to our children, the founding fathers of CCSS and PARCC refuse to acknowledge some startling data from the US Census Bureau, brought to you by ed blogger extraordinaire, Lloyd Lofthouse:


This means a large sector of the American work force is highly over educated and working in jobs that don’t require the education they earned, because those jobs do not exist.

In addition, if there are shortages of skilled workers in some fields, how can that be blamed on the public schools, teachers and teachers’ unions? After all, Americans pride themselves on the freedom of choice regarding their lifestyles, and our children and adults make academic choices as they age. For whatever reason, these choices lead to dropping out of high school or staying in school to graduate and/or go on to earn an associate, BA, professional or doctorate degree. If an individual majors in the wrong field, do we blame K–12 teachers for that, too? (emphasis mine)

Another ed blogger, Leonard Isenberg, who writes at perdaily.com summed it up this way:


50% of recent college graduates with degrees are working at jobs that do not require one, e.g. waiter. Add to this the fact that the total capacity of all colleges and universities in the U.S. is just 30% of high school graduates and one wonders what the rest of students are supposed to do in a privatizing education culture that has closed public school industrial arts and other alternative career and trade programs.

So, students are graduating college with Cadillac degrees only to find work in the Edsel factory. The CCSS and PARCC will not solve that problem, but they will make a boatload of money for the testing industry. And while college debt is at record highs, that debt, unlike corporate debt, isn't erased in bankruptcy.

Parents, before you make sure your child is well-rested and well-fed for test days ('cause the other 171 days aren't really important), blogger Peter Greene, has put together this handy list of questions for you to bring to the next NJ State Board of Ed meeting January 7th:


The Partnership for Assessment of Readiness for College and Careers... is a magical magical test. It can tell with absolute precision, how prepared your student is for college or career because, magic. And who wouldn't want to know more about the powerful juju contained in the PARCC test.

So if Mr. Hespe and any of his friends come to explain how crucial PARCC testing is for your child's future, you might try asking some questions.

The PARCC may look like just one more poorly-constructed standardized math and language test, but it is apparently super-duper magical, with the ability to measure every aspect of a child's education and tell whether the child is ready for college and career, regardless of which college, which major, which career, and which child we are talking about. By looking at your eight year old's standardized math and language test, we can tell whether she's on track to be a philosophy major at Harvard or an airline pilot! It's absolutely magical!

Never has a single standardized test claimed so much magical power with so little actual data to back up its assertions. Mr. Hespe would be further ahead to skip his fancy final paragraph and just tell his people to look parents in the eye and say, "Because the state says so." It's not any more educationally convincing than the magical CACR bullshit, but at least it would be honest. (emphasis mine)


But for all its promises of miraculously making every single child in the United States 'college and career ready', the PARCC test is quickly wilting under the bright lights of scrutiny. As of this writing, only 12 of the original 26 states that signed on, plus the District of Columbia, are participating. When K-12 educators do not take an active role in designing the curriculum and the accompanying assessments, the result is a deeply flawed, poorly executed grand experiment that will ultimately crash and burn.

As the US moves more and more toward an education system like China's, China has seen the error of its truly rigorous ways and is moving more toward a system like what ours used to be—one that embraced minds like Einstein's as something to be celebrated and nurtured, not standardized. 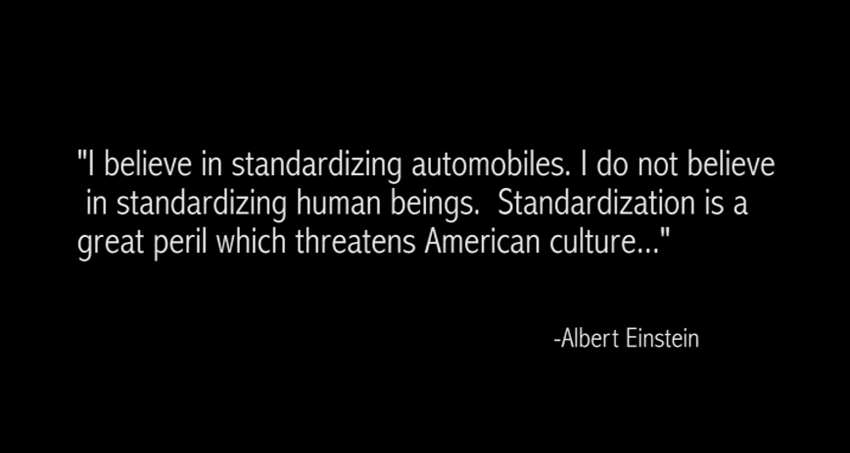 Posted by Marie Corfield at 6:45 AM