My Response to the NJ Pension Study Commission

In a big PR move to sell the state on their recommendations, last week two members of the NJ Pension Study Commission, Tom Byrne and Tom Healey took to the media. Here is my response:


My response to the Pension Study Commission's Report can be summed up in one word: No.

No, you will not take one more dime from the hard working, middle class people who keep this state running 24/7/365 through rain, snow, sleet, hail, super storms, blizzards, floods, bone chilling cold, tornados and blazing heat while you and your families stay warm and cozy in your homes.

No, you will not take one more dime from the hard working, middle class people who would willingly put themselves in harm's way to protect you and your family, because it's their job.

No, you will not take one more dime from the hard working, middle class people who would willingly run into a burning building to save your spouse, your child or your pet because it's their job.

No, you will not take one more dime from the hard working, middle class people who educate the majority of our state's children, sometimes in conditions so deplorable they rival third world countries. Who already spend far too much of their own money to purchase basic supplies for their classrooms and to feed and clothe their neediest students. Who, more often than not, work 10-, 12-, 14-hour days just to keep up with their workload, and then go to their second or third job to keep up with their bills. Who have endured years of verbal abuse from a governor who hates them and the public education system they have made into one of the very best in the nation.

For decades middle class public and private sector workers have watched our take home pay decrease, and our work loads and out-of-pocket costs for benefits increase. All the while, the super wealthy, big corporations and Wall Street cronies have fattened their coffers and lived life on Easy Street. All of this has increased exponentially under Gov. Christie who never met a millionaire he didn't like—or a union that he did.

When do those making the most "share the sacrifice"? How much more do those at the very top expect those of us who are propping them up and supporting their lavish lifestyles to pay? When do the needs of the many outweigh the needs of the few? Why aren't you doing anything about this: 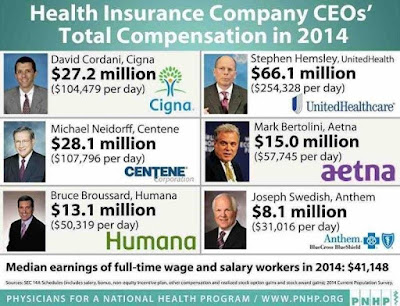 ... instead of recommending that people who make $40,000 a year pay more? Why aren't you recommending the state negotiate better, cheaper healthcare deals with the insurance and pharmaceutical companies? And why wouldn't these deals be made available to every, single person in this state?

Gov. Christie has given away over $5 billion in corporate tax breaks and the state has nothing to show for it. Where is your recommendation to end this corporate welfare?

Where is your recommendation to close the corporate tax loophole that costs the state approximately $200 million a year in lost revenue?

Where is your recommendation to greatly reduce the outlandish fees, expenses and performance bonuses paid to those companies and individuals who manage the pension fund?

Where is your recommendation to reinstate the millionaires tax?

Where is your recommendation to eliminate every non-government employee from the state pension fund?

Already, taxpayers are giving $1.3 million a year to 62 retirees of three Trenton organizations: the League of Municipalities, the School Boards Association and the Association of Counties, records show. That’s in addition to the roughly $7.5 million in local and county taxes handed over for the groups’ annual membership dues that pay the six-figure salaries and cover operating costs.

None of the three associations is part of state government. Privately run, they were granted pension rights by legislators decades before New Jersey entered a fiscal crisis that is leading to an estimated $8 billion structural deficit.

As taxpayers squirm beneath the highest property taxes in the country, the retirement bill from these groups will only grow. Right now, 107 non-government employees have combined pensionable salaries of more than $7 million, according to Department of Treasury data analyzed by the Record.

One of those employees is Bill Dressel, $191,000-a-year executive director [of the New Jersey League of Municipalities].

Celeste Carpiano, who makes $205,000 a year as head of the New Jersey Association of Counties, will also get a publicly funded pension. So will Marie Bilik, who gets $150,000 to oversee the New Jersey School Boards Association.


My pension is not an entitlement. It is deferred compensation. Any notion that my benefits are somehow better than those in the private sector is offset by what I have sacrificed in salary as a public employee. As you well know, the New Jersey pension fund "ranks 95th in pension generosity out of the top 100 plans nationally", and the average New Jersey public employee pension is only $26,000 a year. Hardly a "Cadillac benefit", as Gov. Christie loves to say. Compare that to the daily salaries those insurance company CEOs make, then tell me it's excessive. But, that's the deal the state made with me and the hundreds of thousands of other New Jersey public employees. And we are the only ones who've upheld our end of the bargain over the past few decades.

We are getting screwed. And you are presenting us with a screwdriver.

How do you sleep at night knowing that your recommendations may push even more middle class people into foreclosure in the state with the highest foreclosure rate in the nation?

There comes a time when the hard working public employees who keep New Jersey running have to say, "Enough is enough!"

I reject the notion that public employees, who have dutifully paid more than our fare share over the decades must now pay more for less and work longer to get it.

I reject the notion that the only solution is to place the burden of the fix on the shoulders of those who are following the law.

I reject the notion that our pensions will bankrupt the state when the state is giving away hundreds of millions of dollars in tax breaks to the wealthy and corporations.

Here is my recommendation: Go back to the drawing board. Scrounge under every sofa cushion and check every coat pocket in Trenton. Hold a bake sale, a garage sale, do whatever it takes to find the money. Except do not expect the only people who have followed the law and consistently contributed to the pension system year in and year out while politicians from both sides of the aisle used it as their cash cow to contribute one more dime.