The Real Truth About Fixing NJ


Former GOP Assemblyman (LD16) and 2017 Gubernatorial Candidate, Jack Ciattarelli, closed his recent op-ed in the Star Ledger with this:


New Jersey can be fixed. But first we need some truth-telling.

I agree. But, as the saying goes, "Position determines perspective"—and in this case, the truth.

While it's true that the state is "facing a fiscal precipice", it's not true that the only outcome of "progressive rhetoric" would be "a culture of dependence," or worse: "socialism"! If that's the alternative to eight years of Chris Christie's disastrous version of trickle-down economics that left this state in a shambles, I say, "Bring it on!" (Good thing I'm not running for office. I can just see the oppo mailers: 'Corfield is a Marxist!')


Ciattarelli tries to speak in a unifying voice, using "We" over and over. But who exactly are the "We" of which he speaks? The "We" of the 'Healthy, Wealthy and White' suburbs? The "We" of the solid middle class? Or the "We" of our low-income urban centers? All three groups fared far differently under Christie. And all three will fare very differently under the Trump/GOP tax scam: the rich will win, and the poor and middle class will lose. Ciattarelli offers no solutions except those that hurt the largest number of "We" in the state: children, young adults, seniors, the working poor and the middle class. Christie 2.0.


When reviewing the quality of life indices in the top ranking countries in the world (here, here, here), it's important to note that a) the US is not in the top 10, and b) what Ciattarelli decries as "socialism" (including quality, affordable education and a live-able minimum wage) is in part what makes the quality of life in these other countries so high. But putting the needs of the people first isn't as profitable in the "Corporations Are People" era.

The truth is that greatest investment in socialist programs this country ever made pulled us up out of the Great Depression and built the middle class. If we want to pull New Jersey out of its tailspin, we must invest in our people, not continue to give huge corporate tax breaks that yield few jobs. We must invest in infrastructure and education. We must pay workers a living wage so that they have a real chance of getting out of poverty. We must have a tax system where everyone pays their fare share. And the state must uphold its contract with its public employees to fully fund our pensions. We have kept our end of the bargain while both Republican and Democratic state leaders reneged on their promises. We have made concessions. We now work longer, pay more and get less in return. While the wealthiest 1% in this state have seen their net worth skyrocket, many public employees (along with countless others in the private sector) have seen their paychecks decrease every year since Christie took office. That's the "We" in my circle. And that is not a recipe for recovery.

Take a look at that counter on the upper right side of this page. That's how long the state teachers pension has to live. That's the biggest fiscal precipice facing this state. Nothing—including tax revenues from legalized marijuana— should be off the table when it comes to creative solutions for this mess.

Ciattarelli blames his party's lack of "direction" or "solutions" for Guadagno's defeat. But the larger truth is that the GOP allowed itself to be bullied from the get-go. Bills to spur job creation, Port Authority reform, funding for women's health care, and so many more issues that would have helped the state get back on its feet— and shown that the GOP had a heart—fell by the wayside as electeds cowered in fear of the "Wrath of Christie" for daring to override one of his vetoes. A party so beholden to a man who chewed us up and spit us out, who left this state for greener—albeit unattainable—pastures to advance his own political agenda was never going to win that race.

Ultimately, fixing what's wrong in any system comes down to priorities. Phil Murphy can affect many of the changes he ran on as long as those who govern with him hold those same values, and the people of this state hold them all accountable.

And that is the truth.

PS: Also contained in Ciattarelli's piece was a cheap shot at NJEAs decision to endorse Sen. President Steve Sweeney's opponent in November. While I don't always agree 100% with what my union does, I can count on the fact that we will hold accountable those who break promises to our members. Maybe if Ciattarelli's pension was about to fall off a cliff, he'd think differently.

Posted by Marie Corfield at 11:08 AM No comments:

"We the People" means all of us because if you're not at the table, you're on the menu

In an op-ed in today's Washington Post (not available online as of this writing), Joe Scarborough asks:

What will finally move Republicans to deliver a non-negotiable ultimatum to this unstable president? Will they dare place their country's interests above their own political fears? Or will they only move to end this American tragedy when there is nothing left to lose?

To which Eugene Robinson replied this morning on Scarborough's Morning Joe:

This Congress won't do it's job, and I see no reason to expect that to change. I think the duty of the American people is in November to elect a Congress that will... This is not in terms of partisanship. They can be Republicans; they can be Democrats, Independents. Whatever they are, that they are patriots, that they are willing to do clearly what is their job, their constitutional role right now in this extraordinary situation. (emphasis mine)

We the People have to stop this runaway freight train because the Republican-controlled Congress won't. We can scream and yell and protest and tweet at them all we want, but they have turned a blind eye and a deaf ear to reality, so it's up to us. We can and will succeed in November. We started the fight on January 21, 2017. The wave of activism that has swept across this country since that day makes the Tea Party Movement look like watered down decaf. 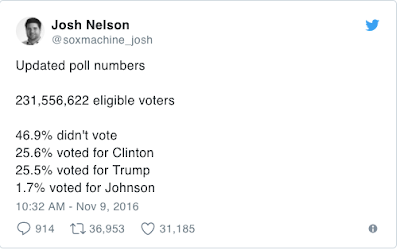 This year we will see a record number of primaries and challenged House races. My guess is that this will be the most expensive non-presidential election cycle in history.

But none of that matters if we don't vote. Almost half of all registered voters didn't vote in 2017. If we want to save this country, we simply cannot afford that this year, especially when nothing has been done to prevent foreign powers from tampering with our elections, and the GOP has done far too much to suppress the voting rights of minorities.

Flipping the House also includes electing many more women. Women outnumber men in the US by the slimmest of margins, but we are woefully underrepresented in elected office at all levels. New Jersey, the most densely populated state in the union, has only one woman representing us in Congress, Bonnie Watson-Coleman. Electing more women is the only way we will truly have a voice for the issues that matter to us including pay equity, health care and reproductive rights, sensible gun legislation and poverty.

US News and World Report ranked Sweden, where women hold 44% of Parliament's seats, #2 out of 60 industrialized nations for its overall quality of life. The US is in 18th place.

[C]ommitment to human rights, public service and sustainability have helped to make [Sweden] a respected leader in international affairs.

Sweden operates under a model similar to those of other Nordic nations: heavily capitalistic with a large percent of spending going toward public service. Once well above the global average, tax rates have decreased, and an advanced infrastructure and transportation network assist with equal wealth distribution. Health care, as well as a college education, are free, and its people boast one of the longest life expectancies in the world. Almost all of Sweden's trash is recycled. (emphasis mine)

All that in a capitalistic system. Imagine that.

We all have to work

I live in New Jersey's 7th Congressional District, a GOP bastion for as long as anyone can remember and a DCCC target this year. Right now there are six candidates for the Democratic nomination. I have been volunteering on the campaign of Linda Weber. Many of us here in the 7th believe she is the right candidate at the right time. She is the most qualified, the most representative of the district, and best-positioned to defeat Rep. Leonard Lance. I could go on about why, but check out her website. It tells the story far better than I. And of course, if you like what you read, please consider donating and/or getting involved.

Linda is but one. There are many other highly qualified candidates running in districts all over the US. You owe it to yourself to find out who is running in yours and support them. Any amount you can donate, whether $5 or $500, helps these candidates fight for you. It's a sad state of affairs, but candidates have to raise a boatload of money to be viable, so every dollar counts.

If you are an unaffiliated voter, consider registering for the party of a candidate you support so you can vote in the primary. Volunteer to phone bank or canvass. Host an informational event. Register voters. Whatever you do, do not sit this one out. The future of our country truly is in our hands.

Posted by Marie Corfield at 10:34 AM No comments:

It's been brutal, no doubt. I freely admit to losing it on social media on more than one occasion, and lying awake at night wondering if I'm stuck in that Dallas episode with Bobby Ewing in the shower. But sadly, no, it's not a dream. All of this is quite real (more on this later).

I am not a religious person, I do believe there is a power greater than all of us, that lives inside all of us, that surrounds us, that is the source of all our joy, happiness and strength, that is accessible any time day or night. It goes by many names: God, Allah, Love, the Force, the Universe, the Collective Unconscious, meditation, and many more. Whatever it is, it transcends this 3-dimensional reality. It's the glue that holds us all together.

In between fits of rage and an occasional shoe-throwing-at-the-TV episode, I found myself calling on that power quite a lot last year. It brought me to the point of surrender. Not the white flag waving kind. Rather, the kind Obi Wan had when he turned off his light saber and let Darth Vader turn him into space dust. There's strength in letting go. There's strength in nonviolence. 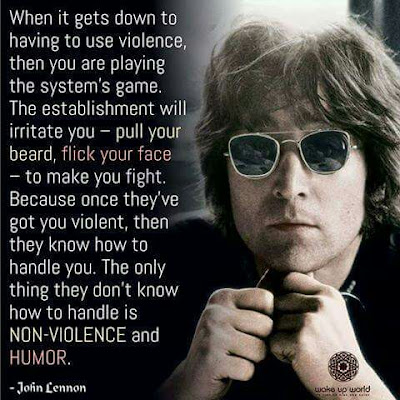 I'm not one to make New Year's Resolutions, so let's just call this a big coincidence. Here are 12 ways I plan to implement for a more peaceful journey through Trumplandia this year. I've already started doing some. I don't claim to be perfect, but I will make a concerted effort.

If any of them bring you comfort, terrific. If you think this is all a bunch of hokum, I'm okay with that, too. Take what you like and leave the rest.

I hope you find something useful in what I've written. If so, please share with others. As I said earlier, take what you like and leave the rest.

Wishing you a healthy, happy, peaceful and proactive 2018.

Posted by Marie Corfield at 5:11 AM No comments: