Even though Trump ordered the White House comment phone line disconnected, you can still make a phone call and register your complaint. How? Call one of his US hotels.

Below is a list of all US Trump hotels and contact info. When you call, please remember your manners. The person answering the phone is just doing his or her job. If you've ever stayed in an even halfway decent hotel, you know that the staff are trained to be polite and courteous. And all that politeness increases in direct correlation with the price of their rooms. Trump hotels are luxurious, so expect the staff to be super nice. Don't blame them or dump on them or curse or rant and rave. Thank them for their time and wish them a nice day. Treat them how you would want to be treated. If you email, please follow the same guidelines of respect and manners.

"Hi, my name is _____________. I don't know if you know this, but President Trump ordered the White House comment line to be disconnected. I wanted to let him know how I feel about the Muslim Ban, so I thought I would call and leave a message with you."


Now, most likely the person will tell you they can't take messages such as this, etc, etc. And that's fine. The point of this action is just to jam their phone lines. People are already doing this, so I'm sure word is traveling up the food chain.

After you've made your call, post on social media using these hashtags: #MuslimBan #CallTrumpHotels #EmailTrumpHotels 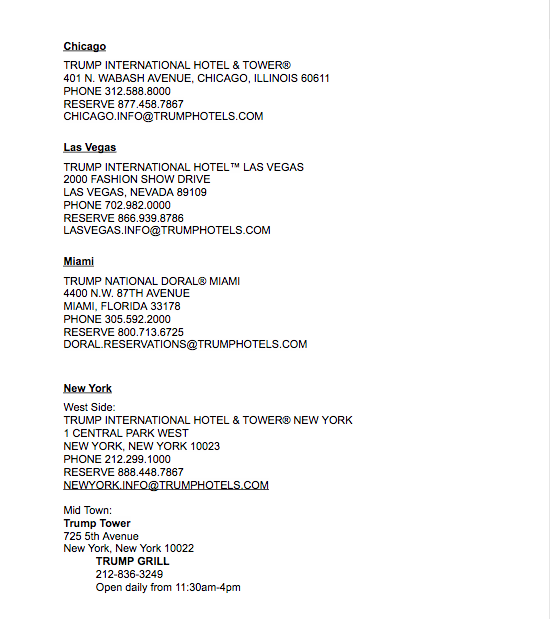 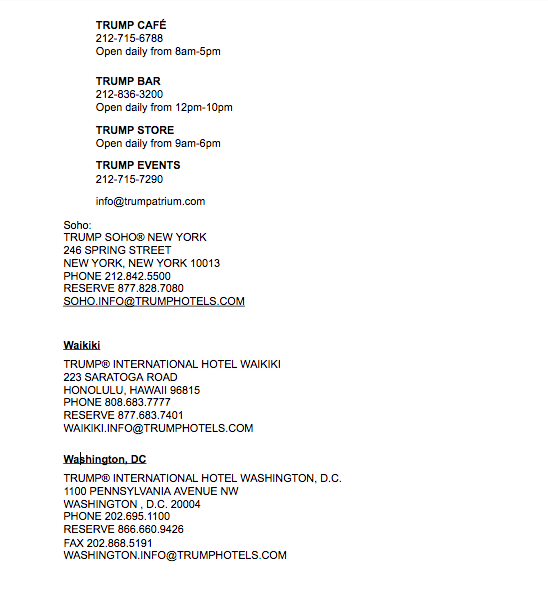 Posted by Marie Corfield at 9:34 AM No comments:

The First Week of the 115th Congress

NJ Congresswoman Bonnie Watson Coleman posted this on Facebook yesterday (all emphasis mine):

The week in review:

We - progressive, liberal, libertarian and conservative - need to all wake up to what is actually happening to our beloved country.
#UnitedWeStand
COPY AND PASTE this entire post into your own status update instead of sharing. More of your friends will see it.

Thank you Rep. Watson Coleman! You were a fighter when you were a New Jersey Assemblywoman and we are so glad you are fighting for us in Washington.

Folks, this is not America. This is not a democracy. My country is quickly devolving into an authoritarian regime, a puppet state with Putin pulling the strings.

But as the saying goes, "What do we do when we're under attack? We stand up. We fight back!"

Get on the phones. Call your elected officials and demand an explanation. Then, get up, get out and fight like hell!

Posted by Marie Corfield at 5:02 AM No comments:

On January 11, the Senate will hold confirmation hearings on Betsy DeVos. Since Trump nominated her for Secretary of Education, a great deal has been written about how she has used her money, power and influence to destroy public education in Michigan, and advance her religious beliefs. See here and here. Jersey Jazzman wrote two important pieces within the past few days.

So, what can you do? Well, if you think 'Nothing', keep reading.

Yesterday, House Republicans ditched plans to eliminate the Independent Ethics Office in part because of all the phone calls they received from angry constituents. Heck, even Donald Trump wasn't thrilled: 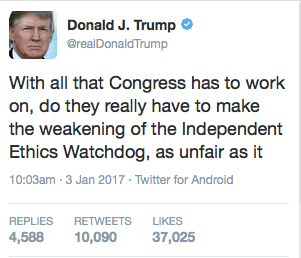 So, if we can get that many people to jam the phone lines of our elected officials, there may be a chance. What can I say? I'm an eternal optimist.

I created this handy form to give to members in my district. Scripts were generated by the Network for Public Education. I included PA senators because a good chunk of them live there. Feel free to edit to suit your audience.

Doing nothing is not an option.

Posted by Marie Corfield at 5:05 AM No comments:

Who doesn't love an anniversary celebration? Well, let's get out the hats and noisemakers 'cause NJ's got a big one!

In exactly 10 years the lousiest pension fund in the United States—that's been raided for everything from plugging holes in state budgets to financing the construction of a now bankrupt casino during the height of the recession—the New Jersey public worker pension fund is scheduled to run dry! Yippee! See the counter on the right side of this screen.

But there are a couple of rays of hope:


I do not claim to be a pension expert, but this does sound promising given that last November, NJ voters approved a constitutional amendment dedicating the gas tax to the transportation trust fund:

Currently, the State Investment Council has a 10 percent cap on pension investments for any single bond sale. The proposed legislation would only remove the cap for TTF investments.

Sweeney (D-Gloucester) argued it would give the state greater flexibility on a "risk-free return on investment." If, for example, the TTF borrowed $1.2 billion at a 5 percent interest rate, then the $60 million would go to support the pension fund, Sweeney said.

Both also argued putting TTF debt with the state's pension fund would save the state bond underwriting fees.

"Why are we letting other people make interest off of us?" Sweeney asked at the Statehouse news conference announcing the legislation.

Both the TTF and the pension fund are on life support. If they can help each other—and we can pass a constitutional amendment to fund the pensions—this may just be a win-win situation. But, as Hetty Rosenstein, State Director of CWA NJ said:


"CWA supports quarterly pension payments. However, unless the full amount due to the plan is appropriated, quarterly payments are meaningless...

"When it comes to this state's pension, history shows we simply cannot rely on the word of the governor or legislature. So, without a constitutional amendment requiring payments, New Jersey's working men and women could be getting quarterly payments of nothing."


Last August, after promising state workers he would do so, Sen. President Steve Sweeney failed to post the Constitutional Amendment bill that would have given the voters the power to write pension payments into the state constitution.

We must continue to demand that our state legislators to fight like hell to get that question on the ballot this year.

ICYMI: check out this video from NJ.com. It gives a brief overview of how we got into this mess, and although it rightly claims that Gov. Christie has put more money into the pension system than the previous 6 governors combined, he has never made the full payments as required by law, and vetoed 2014 legislation requiring quarterly payments, which would go a long way toward fixing the problem.

Posted by Marie Corfield at 6:43 AM No comments: