Q: How do you know when a politician is lying?

A: When their lips are moving.

I guess now that Christie's poll numbers are in the tank, his ego is pushing him to appear relevant. So what does he do when his back is against the wall? Attack public education of course.

In true Christie style, he gave a speech yesterday that even Pinocchio would cringe at, ripping into the state's school funding formula—one of the most progressive in the nation—and vowing to change it to flat funding.

There are so many things wrong with it that it's hard to know where to begin. But let's start with this: Gov. Christie used the word 'unfair' seven times in his speech. So here are seven things that are unfair not only with his proposals, but with how he has treated public education over the past 6 years:

1. Gov. Christie has cut almost $7 billion in education funding statewide, and given away just about that much in corporate tax breaks, yet he has the nerve to claim that urban education is 'failing'.

2. Under Gov. Christie, urban charter schools have bled their host public school districts of hundreds of millions of dollars, which has forced massive layoffs and cuts to programs and vital services.

3. Under Gov. Christie, segregation has skyrocketed in urban school districts as charters habitually skim the best and brightest (and least expensive to educate) students, and toss those most in need of additional resources back to cash-starved public schools.

4. Under Gov. Christie's new funding formula urban districts would be drastically underfunded, thus devastating the very schools and students he claims to want to help most.

5. Under Gov. Christie, aid to those most in need in this state has been slashed. Funding for women's health centers, housing assistance for low income and chronically ill citizens, food stamps, and earned income tax credits have all been red-lined. He even fought the raise in the state minimum wage. These cuts directly affect parents in our large, urban centers, many of whom were already struggling to make ends meet before he became governor. And when their children do not have a good head start in life (like the majority in our wealthier, whiter suburbs), they have greater learning hurdles to overcome.

6. He simply will not, as he claims, "make sure that we have the aid for special needs students so that they may reach their potential too." Why? Because he is going to slash funding to our poorest, neediest districts where there generally tends to be a larger population of special needs children. He has not once kept his word to public school districts. Why should we believe him now?

So, what will work?

This is just a start. There is much more that can and should be done, but unless and until profits are removed from the public education equation, things will never change.

Hat tip to my bloggy buddies, Jersey Jazzman and Dr. Bruce Baker for always having facts and figures at the ready... 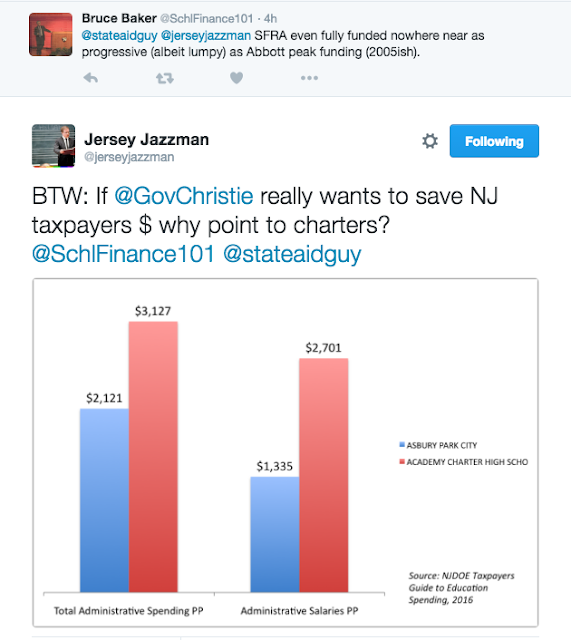 ... and Darcie Cimarusti (aka Mother Crusader) for reminding us what 'fair' really means: 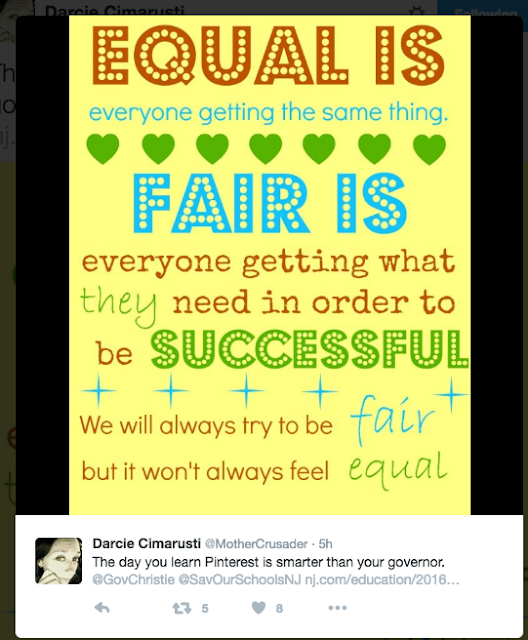 Posted by Marie Corfield at 5:46 PM No comments:

Since the massacre in Orlando just 8 days ago there have been 9 more mass shootings in the US, most of which have not been reported by the mainstream media. Since the beginning of this year, 6,239 people have been killed, and almost 13,000 have been injured—over 1500 of them were children and teenagers. And it's only June. But thanks to the Gun Violence Archive, this information is now readily available and regularly updated.

Next to public education, ending gun violence is a cause that is near and dear to my heart, partly because far too often, gun violence happens in schools.

The only way we as a nation can stop the bloodshed is to demand our legislators take action. On this issue we all should be shouting from the rooftops and marching in the streets.

This morning I received this email from Carol Stiller of the Mercer Co. (NJ) chapter of the Million Moms March/Brady Campaign to Reduce Gun Violence. I urge every person reading this to take action today by making calls and forwarding this to your contacts. Please do not delay. This vote is happening TODAY at 5:30 pm.

If you cannot make calls, there is a quick and easy way to contact these Senators through your cell phone. I highlighted it in yellow.

There are also two rallies in NJ today: one with Senators Booker and Menendez at 11:30 in Newark; the other with Reps. Pallone and Watson-Coleman at 2:00 in Trenton. Details are below. I plan to be at the Trenton rally.

As most of you already know, the U.S. Senate will be holding a vote today, MONDAY, JUNE 20, at 5:30 P.M. on closing the Terror Gap that allows suspected terrorists to buy guns, and on Universal Background Checks. WE ALL need to make calls to the offices of those Senators who we feel could make the difference in a win or loss.

Here are 20 targets for calls. Some are Republicans, some are Democrats. We cannot take these votes for granted, one way or the other. We REALLY NEED ALL of these to get to 60 votes and win! It will only take a couple minutes for each call. These kinds of opportunities don’t come often — WE MUST ACT NOW. Their phone numbers are listed below…

HOWEVER,
if you have a cell phone, the EASIEST and QUICKEST way to contact every one is to text DISARM HATE to 877-877 and you will be automatically connected to one of the targets. WHEN you call again, you will be connected to a different one, and so on. PLEASE MAKE THESE CALLS. We must hold them accountable!

Ask them to vote YES on Senator Feinstein's amendment to prevent those on the Terror Watch List from buying firearms and NO on the weak substitute amendment being introduced by NRA-supported Senator Cornyn of Texas.

Ask them to vote YES on Senator Murphy’s universal background check amendment and NO on the weak substitute amendment being introduced by NRA-supported Senator Grassley of Iowa.

Tell the staffer that answers:
“Hi, my name is _____________.  Please tell Senator ______ to vote YES on Senator Feinstein’s Terror Gap Amendment and Senator Murphy’s Background Check Amendment, and NO on the Cornyn/Grassley substitute amendments. Thank you.”

Please leave a message for the Senator if you can’t reach a staffer.

We are so fortunate that both Senators Booker and Menendez will be voting the right way. If you haven’t already, please call to thank them:

Remember that you can watch LIVE Senate floor proceedings on MONDAY, 5:30 p.m. (other archived proceedings are also available):  http://www.senate.gov/floor/index.htm

If you know anyone in the DC area who would like to join a group who will sit in the Senate Gallery during the proceedings, have them contact their senator’s office for tickets.

THEN after you make your calls or while calling on the way, come out to attend a rally and/or press conference — one in NEWARK with Senators Booker and Menendez at 11:30 a.m. and one in TRENTON with Representatives Pallone and Watson Colman at 2:00 p.m.  See the attached media releases for details. We need to keep up the momentum on these important common sense gun violence solutions!

I know this seems like a lot, but so worth the effort.  And if you need some incentive, listen to my Oakland CA MMM friend Lorrain Taylor’s “It’s Time to Take a Stand”. Devastatingly, Lorrain lost her twin 22-year-old sons to gun violence while they were working on a car.


“…But now its time for us to stand together as one voice…Its time to let the world know that gun violence is not our choice.”

THANK YOU EVERYONE. Together we CAN make a difference.