UPDATE: The real story behind Lily's trip to Camden 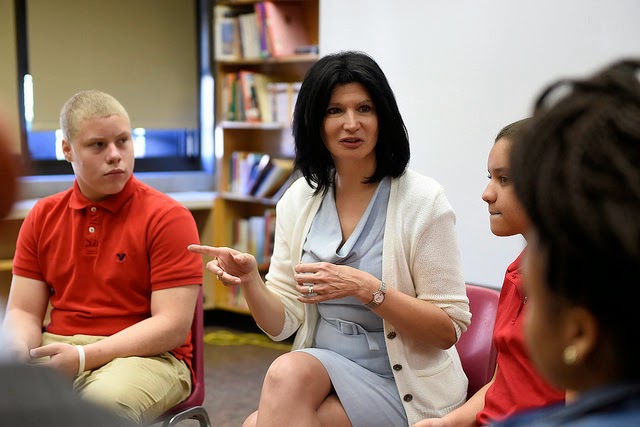 Two weeks ago NEA President Lily Eskelsen Garcia visited New Jersey as part of her 50-state Back to School Tour. I wrote about her visit and meeting with NJ ed bloggers here, here and here.

One of her stops was Pyne Poynt Middle School in Camden which is also home to the co-located Mastery Charter School. While the NJ state assembly passed an amendment to the Urban Hope Act today which gives charter schools greater ability to expand in take over public education in Camden, I had a conversation with someone who was in close proximity to Lily's visit. This person asked not to be identified. Here is their story (my comments are in red):

The entire time Lily was visiting Pyne Poynt she was followed around by two of Superintendent Paymon Rouhanifard's "people". 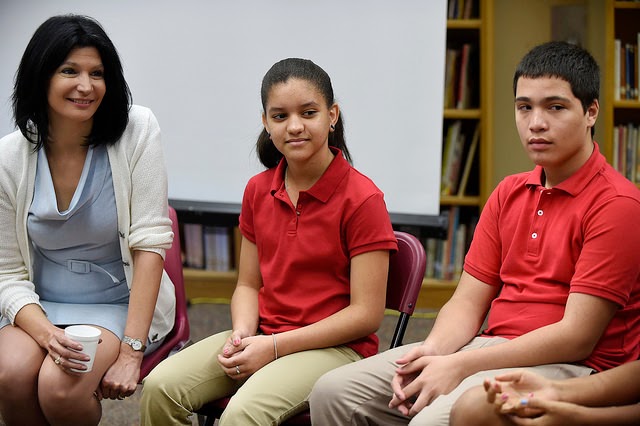 When Lily was in the round table discussion with the students, she asked them what they would change about their school. They wanted to know why the Mastery Charter School half of the building was freshly painted, but their half wasn't. One girl said she wanted her science labs back. She really liked science, but the labs were given to the charter school. When questioned about this, the principal said they would be getting science lab 'carts'.

(Will those carts be equipped with running water?)

The parent group that came to talk to Lily was originally told they couldn't meet with her, but they insisted. They had been waiting hours and weren't going away quietly. They were ushered into a classroom with a security guard who was under strict orders to "keep them contained". They were told they had 15 minutes with Lily. One parent told the security guard, "I'm not talking with you in the room", because she felt he would report their conversation back to the "higher-ups".

After about 5 minutes, the principal told them they had to leave the classroom because a class was coming in, at which point they all walked across the street. The group of concerned parents were then free to really express how they felt and they were very, very angry at the school district.

This version of the events is not surprising given everything Gov. Christie and his minions in urban districts are doing to quash the voices of the people when it comes to their children's education, and the dearth of real investigative reporting on the part of mainstream media.

The Gloucester County Times interviewed Superintendent Rouhanifard, who painted this optimistic picture on the first day of school:

"Layoffs are not fun, but we believed they were necessary," he said. "We deeply believe we have all of the resources to meet the needs of students."

Contrast that with this report from Camden blogger, Stephen Danley, who actually spoke to parents:

This list is just the tip of the iceberg that's about to take down the Titanic school district. The full list of staff vacancies is frightening.

Where is the accountability? Where is the democracy? Oh, that's right, it's for "other people".

Posted by Marie Corfield at 3:30 PM