My Review of the documentary 'Heal Our Schools'

Pick up a newspaper or turn on the television and reporters and other talking heads describe the grand experiment that is corporate education 'reform' with buzz words like 'accountability', 'data', 'innovation', 'testing', 'rigor', 'choice' and 'transformation'. A few words you won't hear too often are 'research', 'proof', 'access', 'stress', 'burnout' and 'anxiety'. That's because those words don't fit into the reformy one-size-fits-all plan of education. Education 'reform'—like climate and vaccine denial—is a faith-based movement in that they believe in their cause rather than rely on empirical studies and peer-reviewed research by actual educators, and they have the money to make you believe it, too. See, facts are messy. They point straight to poverty, and you can't make a profit fighting poverty the way you can by flipping a school to a charter and firing veteran teachers.

Those who are leading the 'reform' movement are some of the richest and most powerful people in the world. Since they control the message, educator voices go largely unheard. As a result, we have taken to social media, book publishing and documentary film making—places where we cannot be censored—in order to challenge the giant corporate interests that have lied to the American public about the state of our public schools. In the past few years, the number of educator-driven blogs, Facebook pages, websites, Twitter accounts and published books has exploded. Diane Ravitch's site alone can command over 1 million hits a day, and her latest book, Reign of Error, debuted at number ten on the NY Times best seller list. The documentary, Standardized, is drawing crowds of parents at pop-up viewings all across the country, and has fueled the opt-out movement. 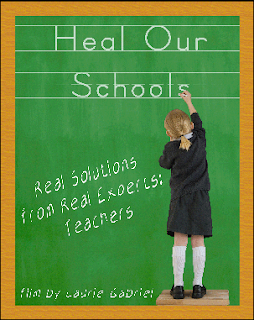 I recently attended a screening of the latest entry in our movement: the documentary film, Heal Our Schools, by former Colorado Springs music teacher, Laurie Gabriel. You can watch the 4-minute trailer here.

Like many veteran teachers of late, Laurie left the profession five years ago after a 27-year career because, as she says, "I could no longer serve up the child abuse I was ask[ed] to dole out." She, her husband and son then spent the better part of the next five years writing, directing and producing this film which was largely self-financed. While she is now many thousands of dollars in debt, she is "obsessed with seeing it to fruition!"

Heal Our Schools, a documentary researched, written and directed by Laurie Gabriel, is being produced with the mission of uncovering and solving the real problems of public education in America. This venture is different from other education documentaries in that it fully explores the experience and expertise of our most overlooked resource: teachers. Through this platform, educators from all over the country can share their compelling (and strikingly similar) stories and solutions. Hear Our Teachers is an enlightening look into what's really going on behind school doors, as well as a collection of virtually cost-free answers to the education crisis—answers that are based on teachers' caring compassion for the children they serve.

The overarching themes of the film are:


Nobody asks teachers, "What do you think of these systems we put in place?" The silence of the teachers is deafening. Nobody's asking our opinion because nobody wants it.

The film points out that 'reform' is crushing the joy of learning for many students. When that happens, some kids simply stop coming to school, and they are generally the ones who struggle more than others, so how is that helping them? As one teacher says, "If you constantly harp on what kids are bad at, they won't want to come to school." The bottom line is that if a child wants to learn, they will. We cannot force the information into their heads.

Which leads to the fundamental question: What is the purpose of education? Most educators would probably say it's to make children productive members of society and to unlock their true passions and interests. But as Anthony Cody says, "The paradox is that something that's supposed to create opportunity is taking away opportunity." We see it time and again as 'reform' crowds out every subject except math and language arts, thus robbing children of well-rounded educations. And charter schools routinely cherry pick the best and brightest students, leaving those who are more challenging and expensive to educate in the chronically underfunded public schools.


Public schools mean 'if you live in my district, I let you in.' Elevating schools that turn kids away is not good for our country.

The film is full of plain 'ole common sense from the experts no one is listening to:

Teachers should make decisions about education; not politicians or business people.

Why aren't we trying to find out why experienced teachers are quitting?

Diane Ravitch: Public policy puts millions into Teach for America, yet 50% of teachers are gone within the first 5 years.

If all 3 million teachers speak up at once, bravery wouldn't be required.

Why are teachers not considered experts in their field?

John Kuhn: Soldiers who fight and lose battles get medals; teachers are branded.

Teachers now teach out of fear; not out of a love of teaching.

My favorite part of the film is when three non-educators are interviewed about their views on the teaching profession, and are then put into a classroom where they will have 30 minutes to teach 10 words to a small group of students. They will be awarded $10 for every word the students remember.

In the interview, they of course trash tenure as part of a 'liberal agenda' and say that the real solution would be for businesses to let their workers off to go teach because they really know about the subjects. Once in the classroom, their eyes were opened wide. One student was sleeping, another calling out, another up out of their chair wandering around. Class was interrupted by announcements, and students coming and going. Had they been first year teachers, their classroom management skills would have gotten them booted out door.

In the post interviews, they all expressed a change of heart. When asked if all the student behaviors were his responsibility, one man said that, to some extent, it is, but a lot depends on what they're taught at home. They couldn't believe a real classroom is actually like that. And another said that "some of us were not meant to be teachers."

The film doesn't solely focus on what's wrong with education 'reform'. It also talks about what the real experts—teachers—see as essential to improving educational opportunities for all students:

As one teacher said, "Our students are experimental guinea pigs." And if this grand experiment fails (and it will fail), the scientists billionaires in their white lab coats expensive suits will simply toss us all aside and begin again without ever reflecting on what went wrong.

But as Diane Ravitch once said: they have money, but we have numbers. Rachel Carson had her Silent Spring; the Arabs had theirs; educators will have ours, too. It's only a matter of time.

I urge you to see this film and, if possible, arrange a screening for other educators and parents. If you are interested, you can contact Laurie here.

Posted by Marie Corfield at 9:54 AM